A Brief Tour of Lebesgue Curves

Before we start a note: this post is a sidebar for another article I’m currently writing. There aren’t any grand conclusions or deep insights, it’s more exploratory.

Whilst writing an article on memory allocations, I needed a way to map a one-dimensional number (the memory location) on to two-dimensional space. By doing this I could visualise where in memory these allocation were occurring.

My initial reaction was to reach for the space-filling Hilbert curve à la the XKCD “Map of the Internet”, but whist researching I discovered the Lebesgue Curve, also known as the Z-order or Morton curve. At first glance it looked to have reasonable locality, and its inherent binary nature meant it appeared easier to implement.

In this article I’ll implement the Lebesgue curve and explore some of its properties.

The Lebesgue curve maps an one-dimensional integer into integers in two or more dimensions. In can also be used in reverse to map two or more integers back into a single integer. If we get a bit fancy with our notation, we can define the Lebesgue function \(l\) as:

where \(\mathbb{N}\) is the set of natural numbers, including 0.

The algorithm is relatively simple:

In the C++ code below I’ve defined the lebesgue_coords() function that implements the above algorithm. It’s certainly not the most optimal implementation (it iterates through all the bits even if they’re 0), but it should have clarity. I’ve then vectorised it in the lebesgue() function that returns a list of \(x\) and \(y\) coordinates for each \(z\) integer, and exported using Rcpp so it can be used in the R environment:

With this function we can have a look at how this function works across the integers \([0,255]\). You should be able to see the fractal-like behaviour, with clusters of 4, 16, 64, etc:

We’ll look at consecutive numbers - which have a distance of 1 in one-dimension - and compare their distance in two dimensions. More formally, we’ll determine see how far away \((x_{z},y_{z})\) is away from \((x_{z-1}, y_{z-1})\) using good old fashioned Pythagoras to determine the distance: 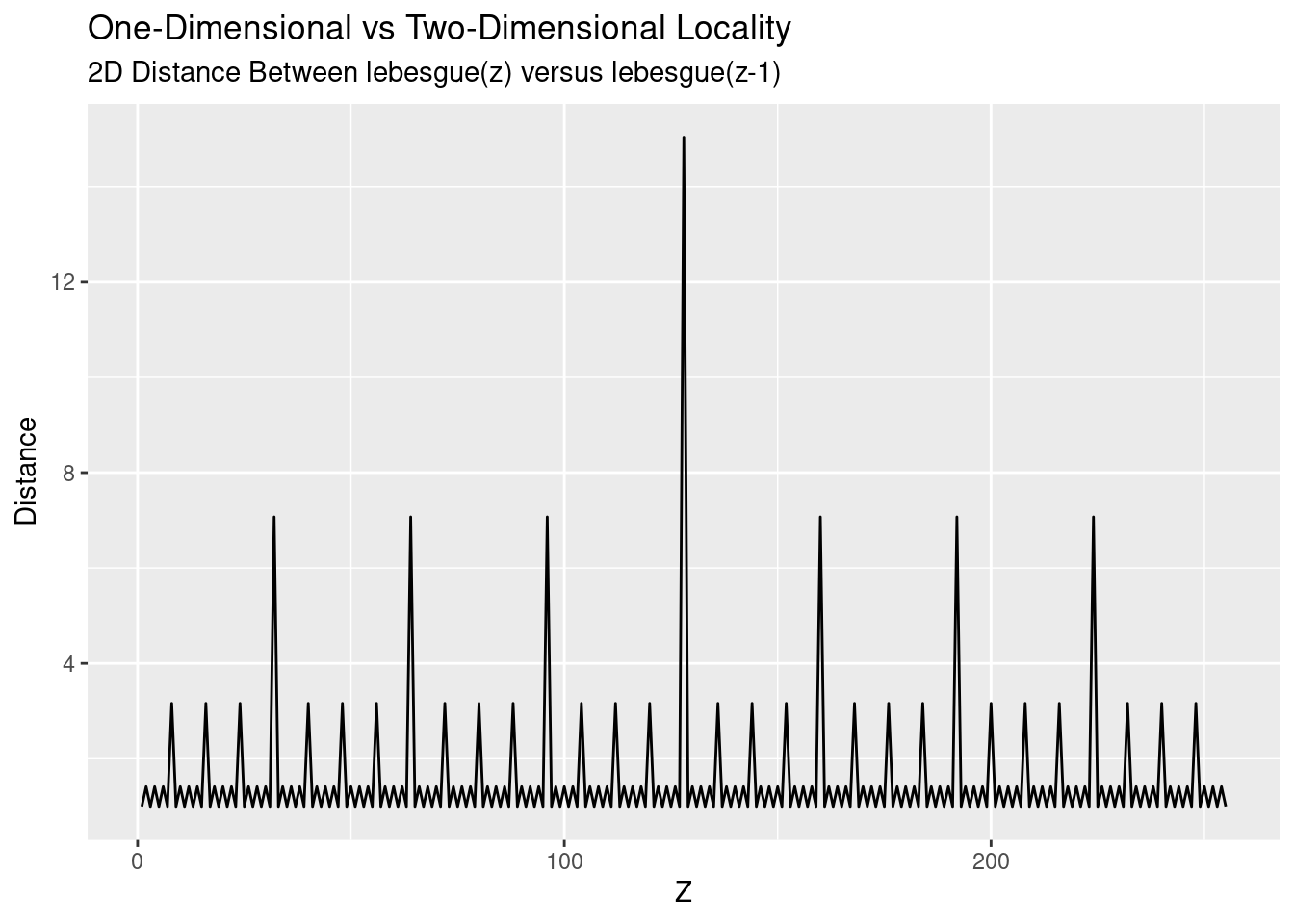 Locality is good, except every so often we get a spike of distance between points. This spike is where we’re moving between our different power-of-two regions: \(2^4, 2^6, 2^8, \ldots\). For a different perspective, we map our two-dimensional points with colour and size conveying the distance: 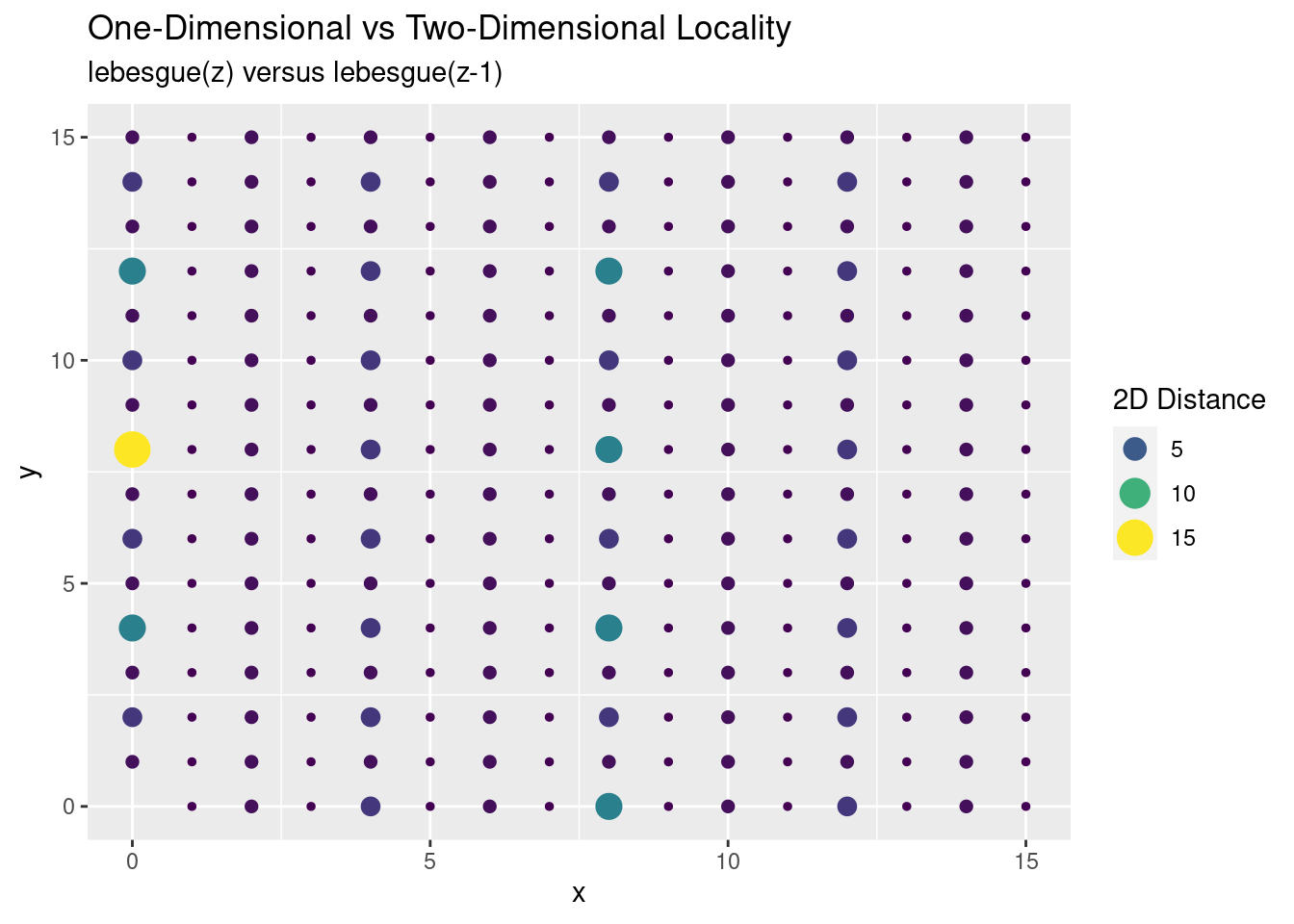 We see the large outlier, but in general most points are reasonably close to each other. More importantly it should be good enough for my original purposes.

Finally, we’ll look at some additive properties that yielded an interesting result. As part of the aforementioned article I am using the Lebesgue curve in, a really useful property would have been this:

As I played around with different ranges and different addends, I couldn’t discern the pattern. The next move was to visualise it to try and better understand the interaction.

We do this in the code below. The crossing() is a handy function to know, generating which generates all 128x128 combinations of the integers 0 through 127. For each of these pairs, we determine whether adding each combination inside the function versus individually leads to a true or false result. The result of this boolean is then visualised on each point on the graph: 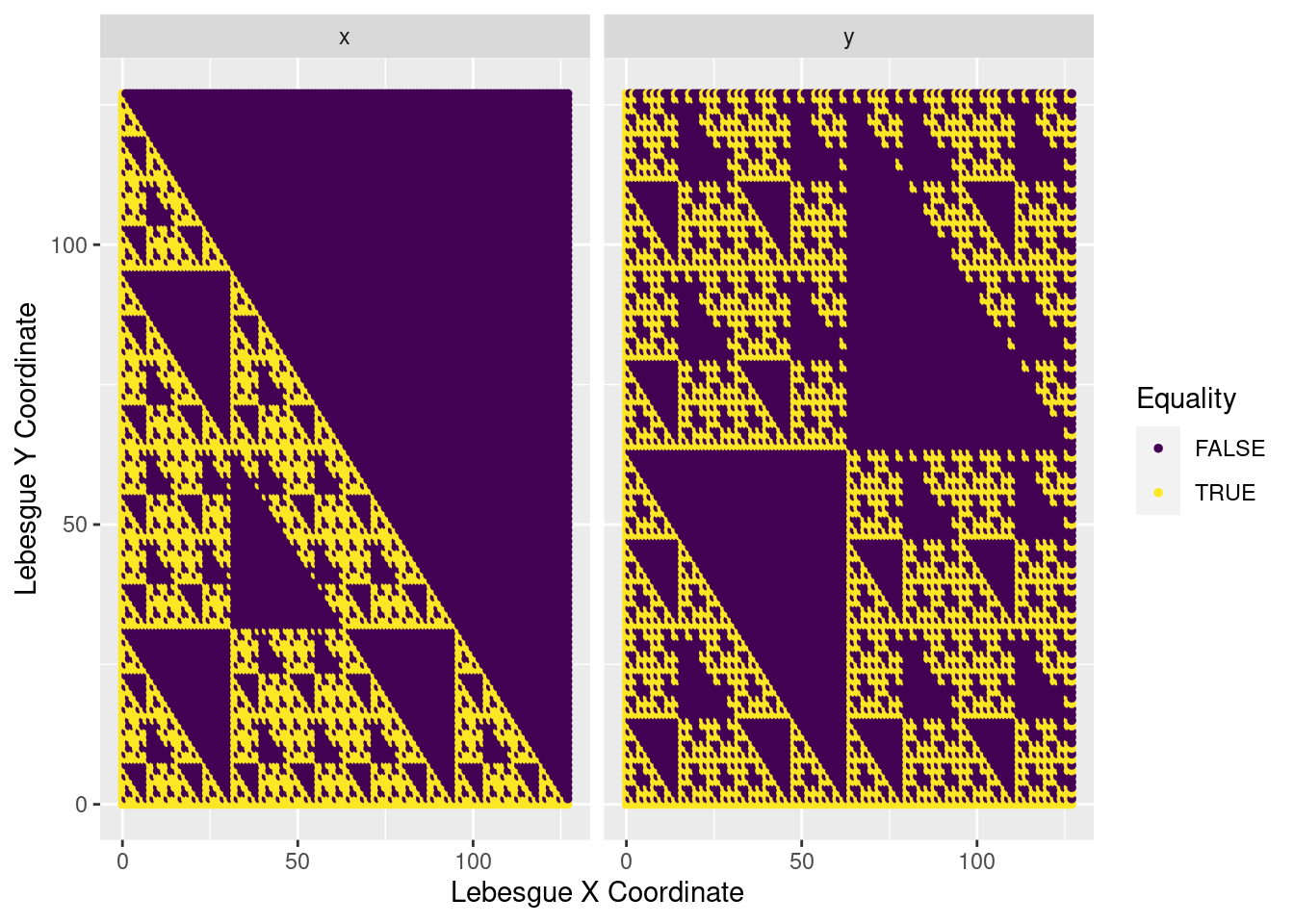 I must admit, I was a bit stunned when I saw this pop out; it was not at all what I expected. You can see some interesting fractal behaviour, with each boolean pattern being repeated in larger and larger sections. It looks a little like a Sierpiński triangle, but I’m not sure if there’s any relation. It may be somewhat anticlimactic, but I haven’t delved any deeper into this. That gets added to the ever-growing todo list.

In this article we had a brief, exploratory look at the space-filling “Lebesgue” curve. We looked at how it’s implemented, some of its locality behaviour, and some interesting results under addition. In a future article we’ll use this algorithm to help visualise the dynamic memory allocations of a process.