Git Under the Hood

While I’m not a programmer per se, I do use git almost daily and find it a great tool for source control and versioning of plain text files. But I don’t think there can be any doubt that it is not the easiest tool to use. But despite its unintuitive user interface, under the hood git is quite simple and elegant. I believe that if you can understand the fundamental constructs git uses to store, track, and manage files, then the using git becomes a lot easier.

In this article we’re going to take a look under the covers and investigate git’s fundamental constructs. We’ll start off with its storage model and look at blobs, trees and commits. We’ll see how branches are implemented, and finally we’ll unpack the git index file to understand what happens during the staging of a commit.

There’s already loads of articles out there on git internals, so what’s different about this one? Two things:

As always, the source code for this article is available up on github.

We’ll start by initialising a git repository, which creates a .git directory and some initial files. Git holds all of the files and metadata it needs for source control in this directory. To clarify things we’ll prune back as many of the initial files as possible, while still ensuring git recognises it as a valid repository.

With a nice clean slate we can move on to our first object: the blob.

The first fundamental git object we’ll look at is the blob. If we create a file and add it to the staging area, we see what has changed in the .git directory.

There’s two new files - an index and an object. We’ll get to the index later in the article, but for now let’s focus on the object. Checking it’s format we find that it’s compressed data:

Decompressing and looking inside, we see the file is in a structured as a “type, length, value” or TLV. The type is ‘blob’, the length is the size of the of the data (excluding the type), and the value the contents of the file we created:

How is the path to the blob object created? It’s simply the SHA1 hash of the blob itself. The first two hexadecimal digits are used as a folder, with the remaining digits used as the object file name. We can show this by recreating the object, taking the hash, and noting it’s the same as our object’s path:

It can therefore be helpful to understand git as a form of content addressable storage: the location of the data that is under its control is based on the content of the data itself. Let’s explore this further: we’ll add two files with the same contents, one in the root directory and one in a subdirectory.

While we’ve added three files but there’s only two objects. Blobs only contain raw data, with no reference to files or directories. There’s only two pieces of unique data, and thus two objects. The file/directory information is stored in tree objects which we will take a look at in the next section.

Over the course of the article we’re going to build up a graph of the objects in the git repository to gain a visual representation of the structure. Here’s our starting point: two blobs, the first four characters of their hash, and their contents: 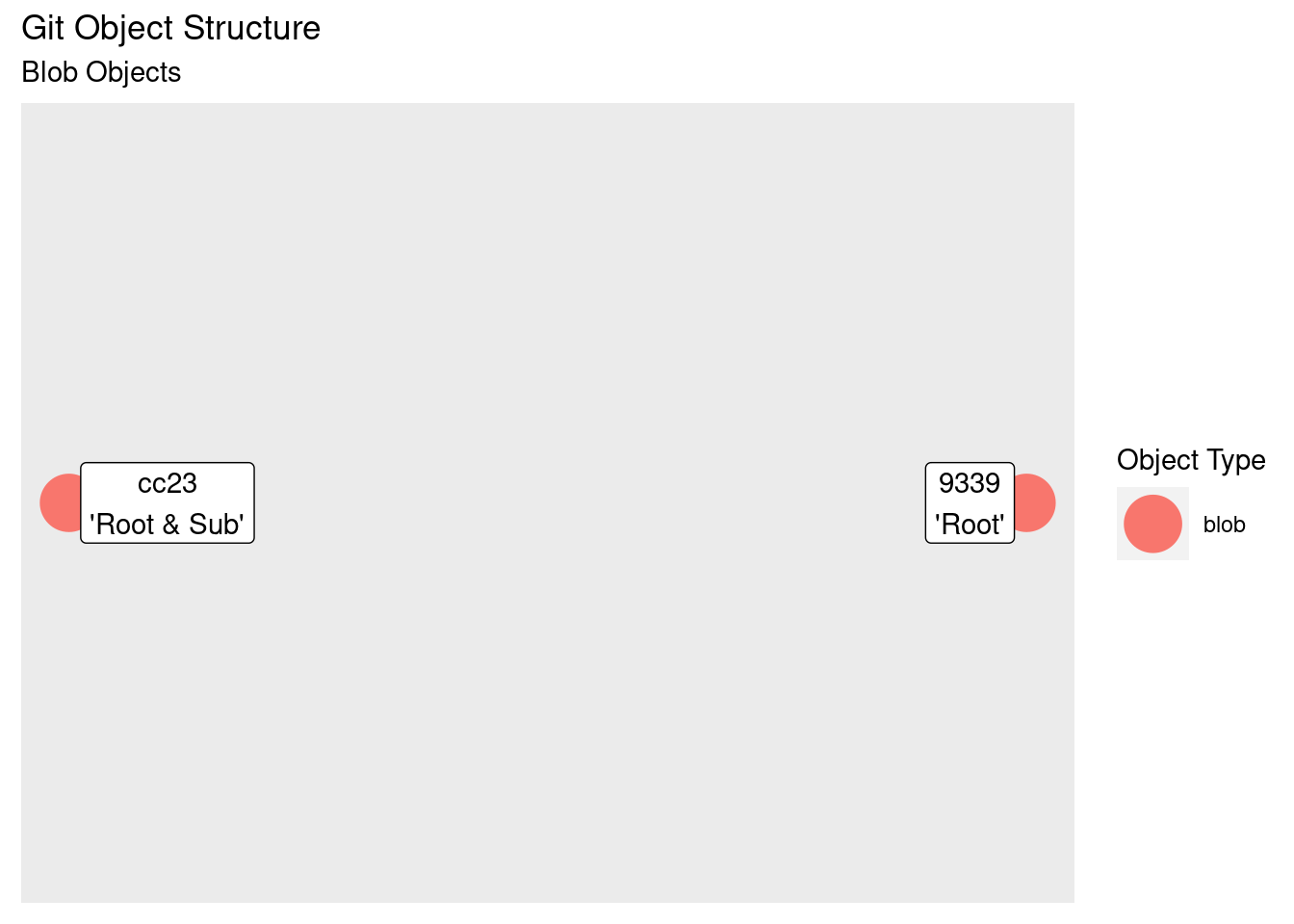 The two little blobs of data look pretty lonely out there. What they need is some context, and this is where the tree object comes in.

As we’ve seen, there’s no file or directory information in the blob object. The storage of this information is the role of the tree object. Let’s perform our first commit and see what’s changed in the repository:

A lot has changed and at first glance it may be a bit overwhelming, but focus in on the objects subdirectory. There’s an additional three objects on top of the two blob objects we saw before. What are they? If you’ll forgive me, I’ll use a very ugly set of commands to pull out the type and length from each of the objects:

So in addition to our two blobs, we’ve got two trees and a commit. Our starting point for will be the first of the tree objects. Unlike the others, trees contain some binary information rather than UTF-8 strings. I’ll use Perl’s unpack() function so decode this into hexadecimal:

Like the blob we have the type and length of the object. Following this there’s an entry for each of the two files and the subdirectory that reside in the root directory. The digits preceding the file name are the mode, capturing the type of filesystem object (regular file/symbolic link/directory) and its permissions. Git doesn’t track all combinations of permissions, only whether the file is user executable or not.

Each of the the two file entries point to the hashes of the blob objects, but the subdirectory points to the hash of another tree object. Looking inside that tree object:

We see this has an entry for the file_z in the subdirectory, and this points to the same hash as the file_y entry in the previous tree. A graph should make this clearer: 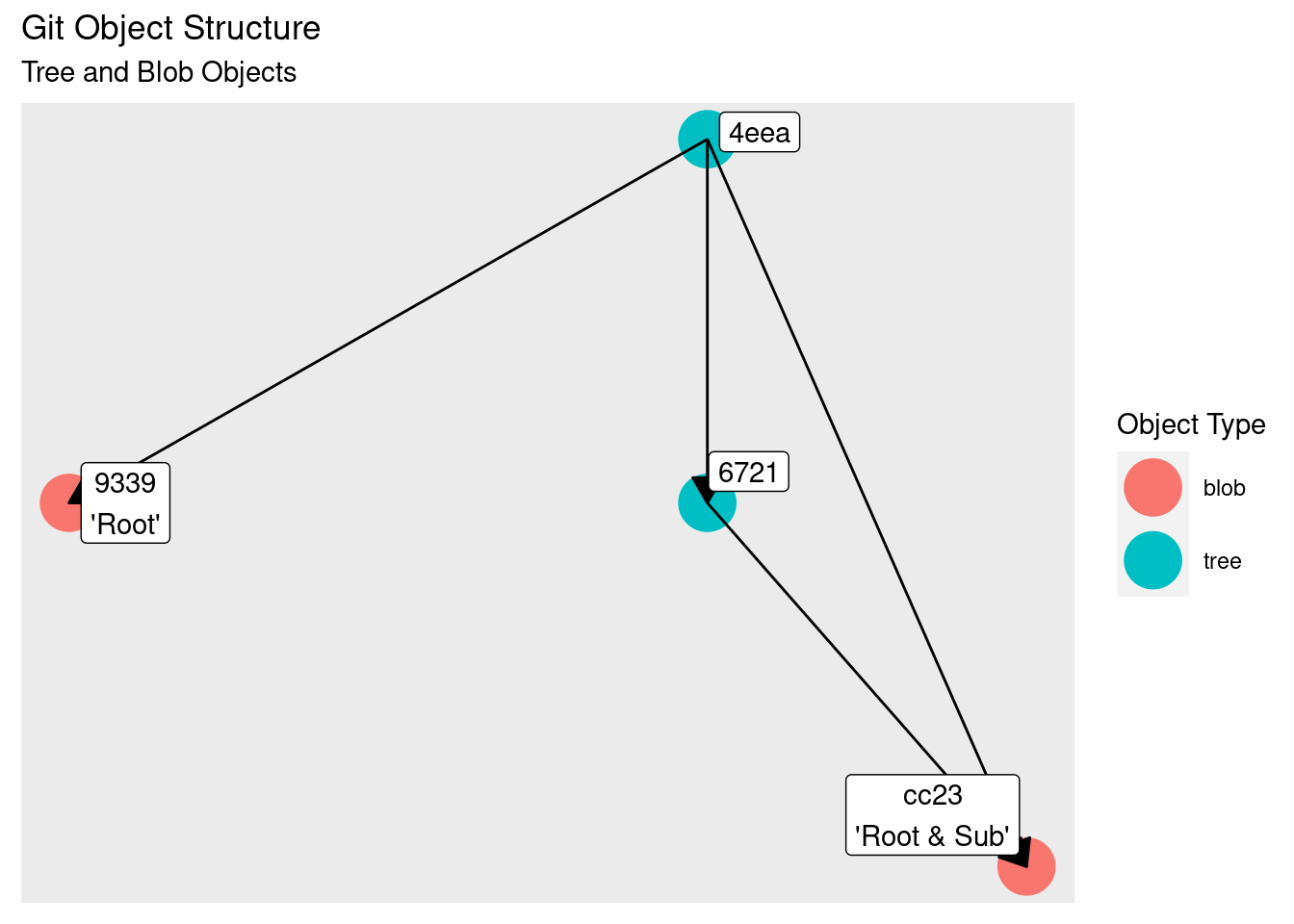 At the top is the root of the tree, with vertices to the two blobs (file_x and file_y) and a tree (the subdirectory). The second tree is has a single vertex to a blob (file_z). The root and subdirectory trees both point to the same blob, because both files have the same contents.

With blobs and trees we’ve built up a pseudo-filesystem, but how does this help us with source control? The object that ties all of this together is the commit.

Our third object - and the one most visible to the end user - is the commit. We’re going to open our commit up, but as we’ll learn about shortly, the hash of the commit (and thus the path to the object) depends partially on the time the commit was made. As I generate this article dynamically, there’s a little bit of overhead to get the commit object:

Again we have the type and length of the object at the start, then there’s a few different pieces of information.

The first is reference to a tree object. This is the tree object that represents the root directory of the repository. The next is the author of the commit, with their name, email address, commit time and the UTC offset. As the person who authored the commit doesn’t necessarily have to be the person who committed it to the repository, there’s also a line for the committer. Following this is the commit message, which is free text input entered at the time of the commit.

Let’s place this on our graph: 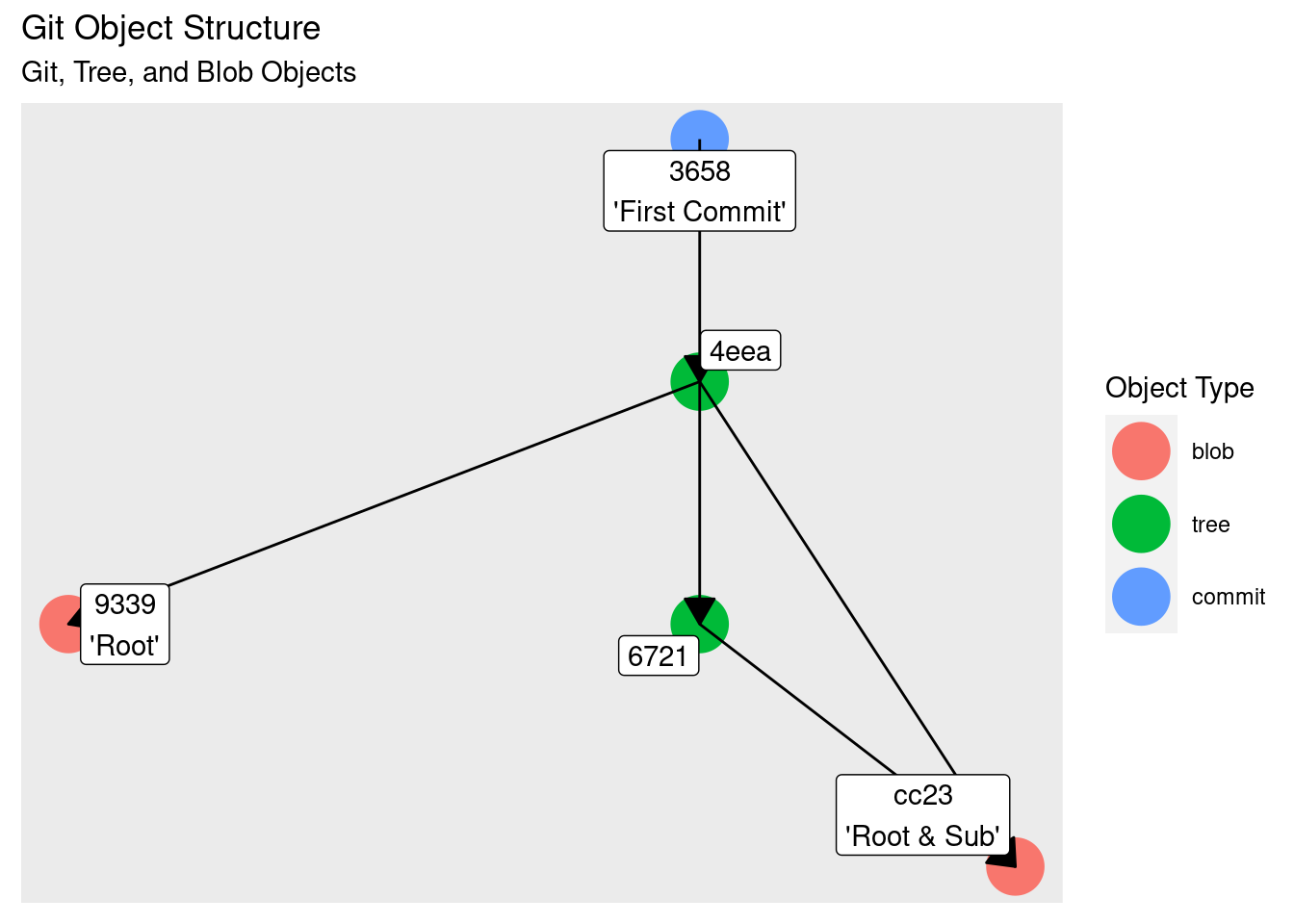 The commit points to the tree object representing the root directory. But this first commit is a special commit, missing a piece of information: parents. Every other commit in this repository from this point onwards will point to one or more parent entries. This creates a directed acyclic graph (DAG), allowing any commit to be traced back to the first commit. As every commit’s hash is dependent on its parents’ hash, the graph is also a form of Merkle tree.

If we change the contents of file_z, stage, and create a second commit, will allow us to see this additional information in the commit object:

We can then place the second commit onto our graph, omitting the link back to the parent (we’ll get to that in the next section): 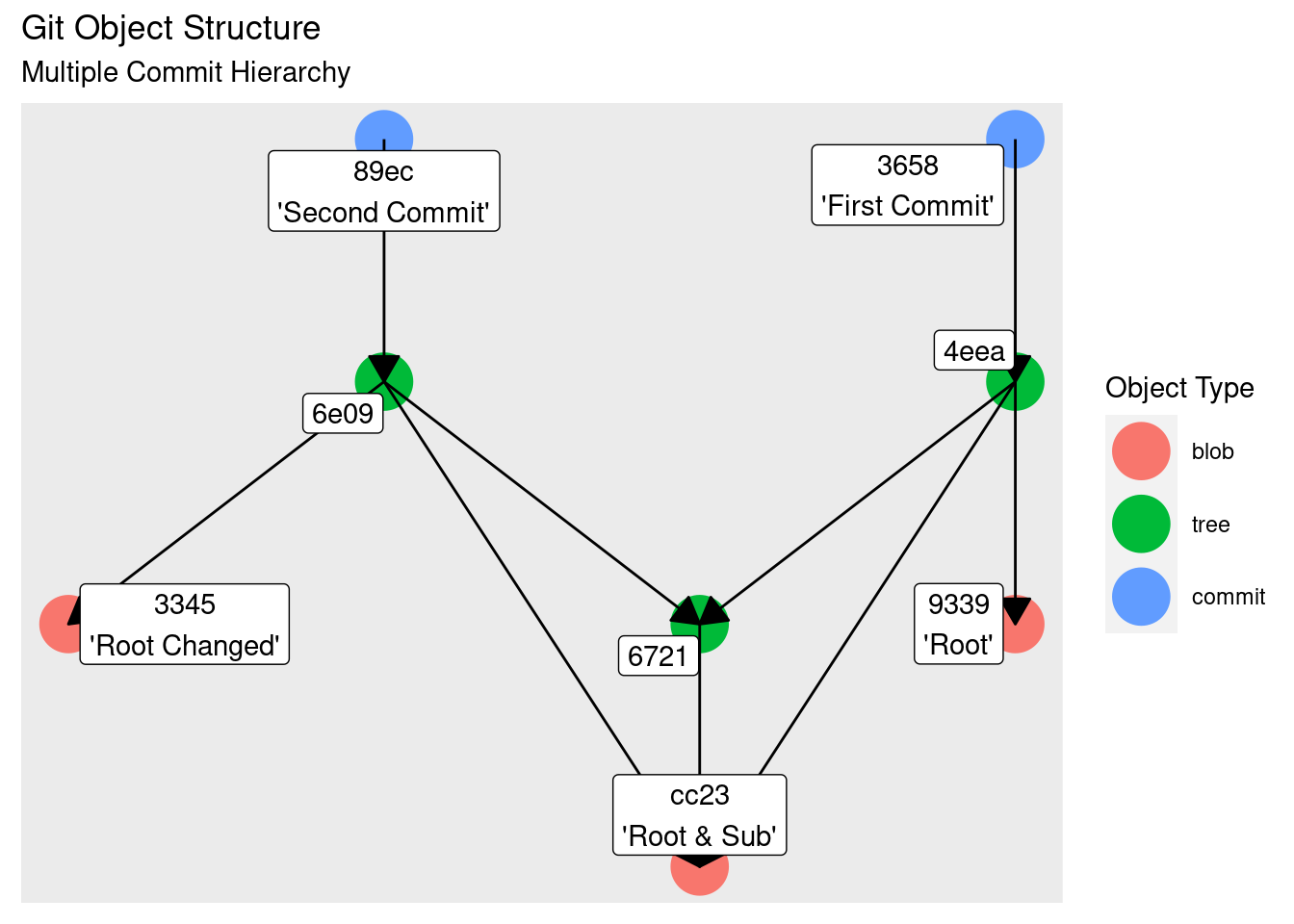 The problem is, our commits are still addressed via a 160 bit hash. This is all well and good for a computer, but we’d like something a bit more human friendly. This is the role of branches.

Branches are relatively simple: they are a human-friendly, named pointer to a commit hash. Local branches (as opposed to remote branches, which we won’t cover in this article) are stored in .git/refs/heads/, and right now the current master1 branch points to the hash of our second commit:

We also need to briefly mention HEAD. This file tracks which commit is currently ‘active’, i.e. the checked out files match those in the commit. We see HEAD currently refers to our master branch2:

If we create a new branch, it will recurse on what HEAD points to until it finds a commit:

If we checkout the master branch and creating a new commit, we ca visualise how the two branches have diverged: 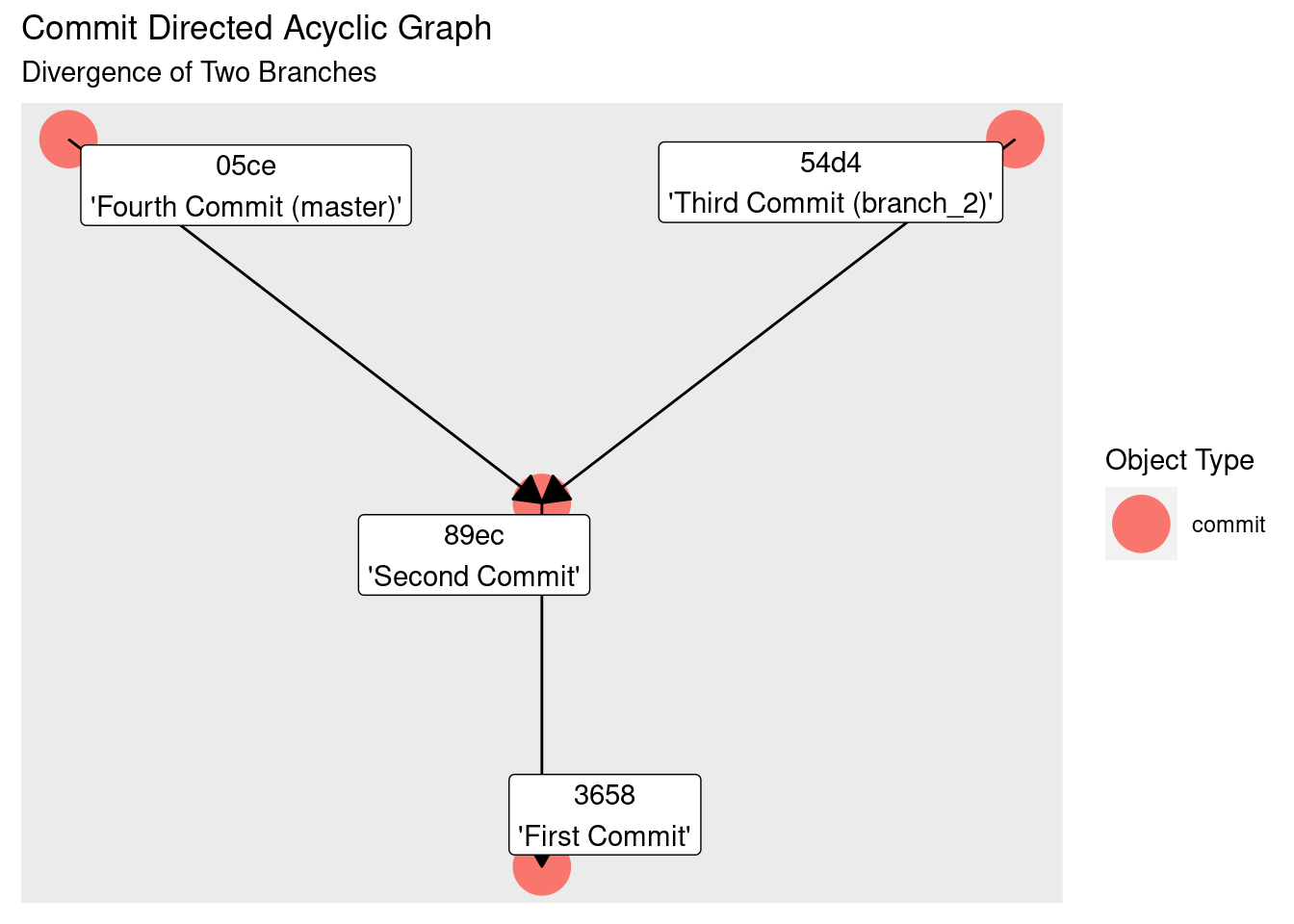 The third and fourth commits are both descendants of the third commit. Adding in our branches to the graph we see they point to the tip of this graph: 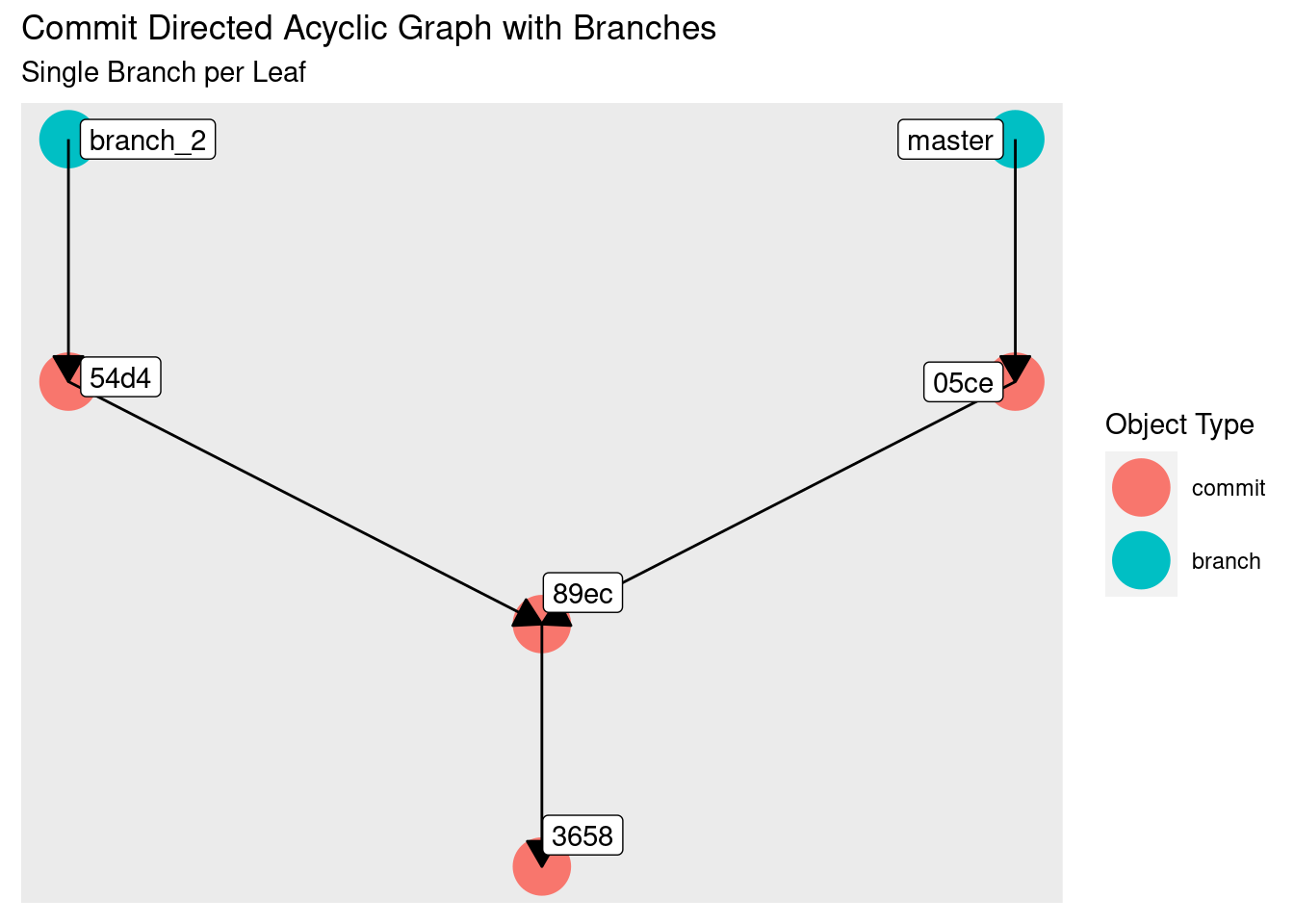 There’s nothing stopping us from creating more branches, even if they point to the same location: 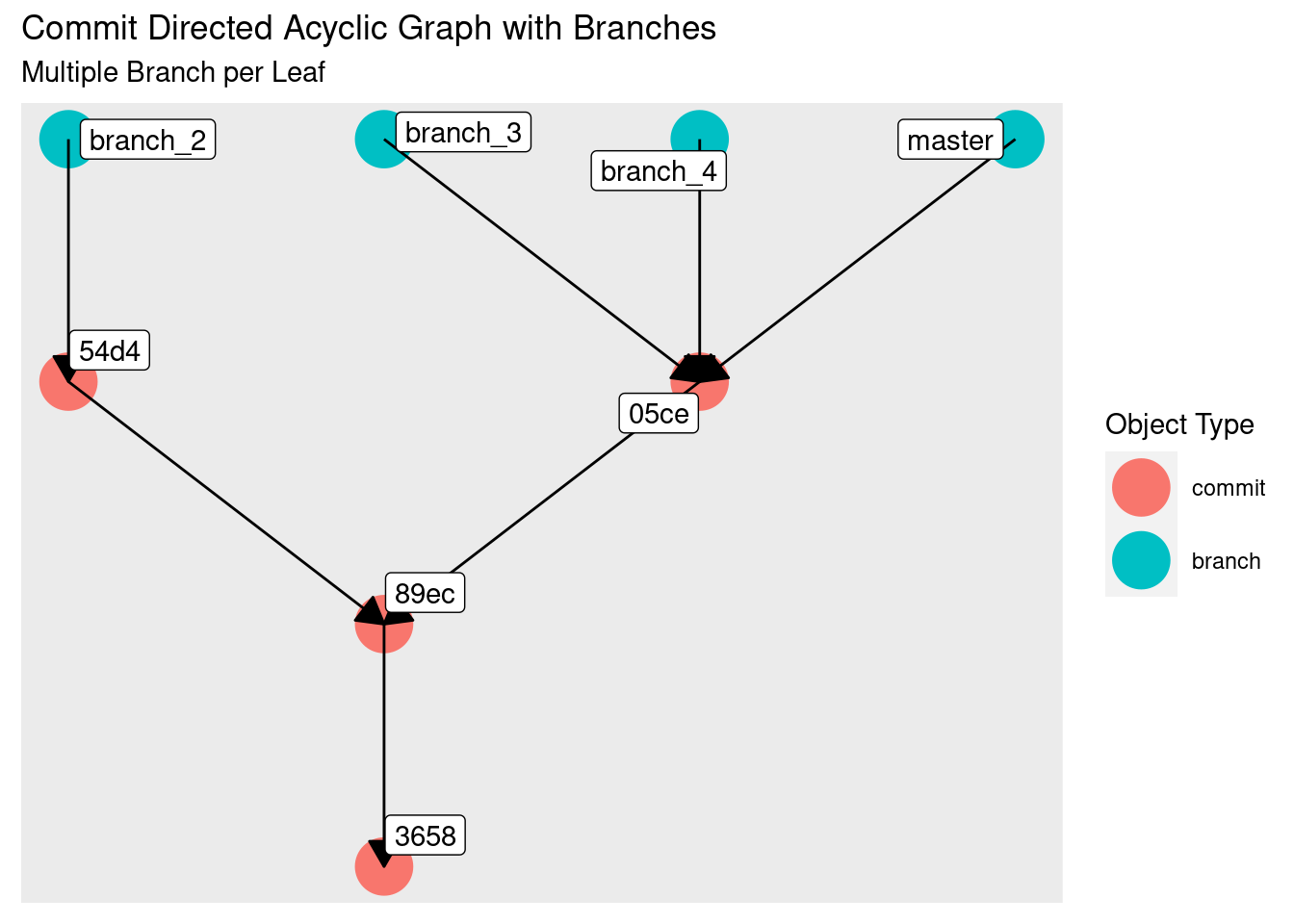 The key takeaway is that branches provide a human-friendly way of navigating the git’s commit DAG.

The final file we’re going to look at is the index. While it has a few purposes, we’ll focus on it’s main role as the ‘staging area’. The exact structure is available here, and I’ve converted this into Perl unpack() language:

The first line shows the the four byte ‘DIRC’ signature (which stands for ‘directory cache’), the version number, and the number of entries (files in the index). We’ve only unpacked one of the files.

The first fields contain information from the lstat(2) function: last changed and modified time, the device and inode, permissions, uid and gid, and file size. These values allow git to quickly determine if files in the working tree have been modified.

Then comes the hash of the object, a flags field (which includes the length of path), and the path to the object.

Now we’ll re-take a look at the index:

The create and modify times have changed, and so has the object that file_x points to. If a git commit is issued, the tree underlying the commit is based upon the current state of this index. When a different branch is checked out, the index is rebuilt so that the files in index point to the correct blobs for that particular commit.

In this article we dived in to the internals of git. We’ve looked at git’s data model and learned about the raw blobs of data, the trees that hold the filesystem information, and the commits that point the root of the tree. We’ve seen how commits have parents, creating a directed acyclic grapg of differing states of the repository.

Branches were shown to be quite simple, human-readable pointers to commit hashes, allowing us to navigate around git’s commit graph. Finally we cracked open index, which is a staging area for the next commit.

It’s perhaps a sad indictment when you have to understand the internals of something in order to use it. This could be bad design, the inherent complexity of the problem domain, or perhaps a little bit of both. Nevertheless git is a widely used tool that’s incredibly powerful, and investing some time to understand it will surely pay dividends down the line when want to manage configuration, code, or almost any other type of text-based content.