A few weeks ago I was analysing some packet captures and thanking the RFC gods that HTTP - and many other protocols - use ASCII/UTF-8 rather than packing everything into binary.

I then started thinking how confusing it would be to look at a packet capture and only see whitespace in the conversation. And thus whitespacer was born: a utility to encode messages into pure, soft, clean whitespace.

Whitespacer has two modes: encoding and decoding. In encoding mode, it takes bytes from standard in, encodes them as whitespace characters, and writes them to standard out. Using the ‘-d’ switch on the command line moves it to encoding mode, taking the whitespace characters and decoding them back to the original bytes. You can find the full code (writen in C) on my github repo.

The encoding is a simple base-4 encoding. Each byte has its four groups of two bits encoded into one of four whitespace characters:

In this article I’ll take you through the program itself, then some sections of code I found interesting to write.

The code has been compiled into an ELF file called ‘ws’. Let’s see what the encoding looks like piped into hexdump:

You can see that the only bytes present are 0x9, 0xa, 0xd and 0x20: our whitespace characters. Encoding and then decoding (as it should) gives us our original string back.

Let’s test it for correctness. We’ll generate a 128Kb file filled with random bytes and run these through the encoder/decoder.

The MD5 hashes are the same, implying it’s encoding and decoding each byte correctly. We can be doubly sure by looking at the distribution of byte values in the random file using a little bit of R. 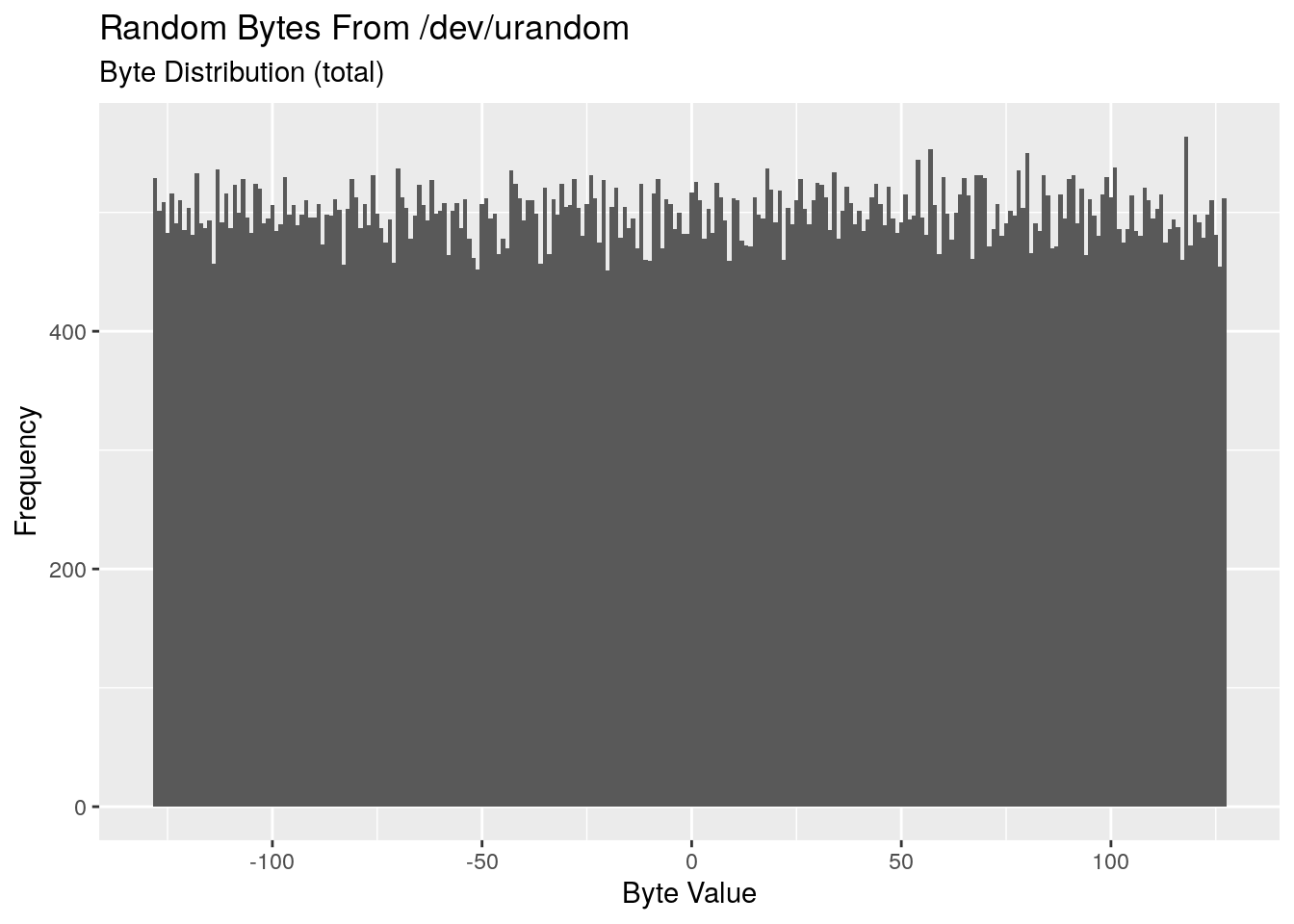 So we know that it’s encoded and decoded every byte value successfully. We now also know that /dev/urandom appears to be uniformly distributed.

We’ve tested it for correctness, but how fast does it run? We create a 3Gb file, ensure it’s cached in memory using fincore, available in the linux-ftools package. Unfortunately fincore doesn’t columnate very well, the last value is the percentage of the file in the cache.

Next we perform a baseine without our encoder/decoder, measuring the throughput using the pipeviewer utility.

Now we insert whitespacer into the pipeline:

It’s a significant hit to throughput, but I don’t think it’s too bad.

Finally, at the start I talked about what it would look like in Wireshark, so let’s look at that. We set up a TCP listener on port 8080 piping to out decoder. We then enode a string and send it down this TCP session. We’ll take a packet capture at the same time.

Here’s what we see in Wireshark using the ‘Follow TCP Stream’ option:

Exactly what I was looking for.

In this section I want to highlight a couple of sections of the code that I enjoyed writing, or had some nuance to them. This includes the lookup tables, the encoding function, and the read loop.

The lookup table used to encode the whitespace went through a few iterations. In the first version there was no lookup table. Instead I used four whitespace characters with contiguous byte values: ‘\t’, ‘\n’, ‘\v’, ‘\f’. This allowed the encoding and decoding to be a simple addition (encoding) and subtraction (decoding) of the lowest whitespace character’s value ('\t’ = 9).

I then realised I could do this a better way, and ended up with the following code:

The encode_lookup_tbl is a static array of the whitespace characters used in the encoding. But the the decoding lookup table is dynamically generated. It’s first filled with a canary value, then we use the inverse of the encoding table to generate the decoding table. I like the elegance of this: if we change the encoding, the decoding is automatically updated.

The encoding also went through a couple of iterations. I first iterated only through the input bytes, and indexed the output bytes using x, x + 1, x + 2, etc.

I moved to a double loop, with x indexing into the input array, (4 * x ) + y indexing into the output array. I will admit that while I reduced the lines of code, I’ve probably made it much harder to interpret.

The reading loop when encoding is really simple: read bytes from standard in into a buffer, encode these bytes, then write them to standard out.

However decoding is a little more nuanced. The challenge is that there’s no guarantee how many bytes a read() system call will return; it could be anything between 1 to the size_t count variable you pass to it. For decoding, our decoded bytes come in as four byte blocks of whitespace. We need to make sure that we’re not passing a split block into our decoder.

To ensure this doesn’t occur, I keep track of the bytes read on each read call, and our position in the read buffer. If the number of bytes read is a multiple of four, we’re fine. If not, we need to go back and read more bytes until it is

I won’t post the read loop code, but you can see it here.

Is this a useful program? Probably not. Was it very difficult to write? There was some nuance, but it wasn’t too hard. It was however a fun project with a small and clearly defined scope. This made it enjoyable to work on in the handful of spare hours available to me.